Last Sunday, we had to work the cattle.  That means calling them all up, sorting them and making sure they are all healthy.  The older calves are separated and are sold.  (it breaks my heart every time!)
We had 15 “teenage” calves to sell.  My orphan calf. Lobo, that we saved and bottle fed was one of them, under my protest.  But that is part of ranching life that I have come to accept.
The next morning the calves were loaded up and taken to the sale barn.  After they were unloaded, Steve got a receipt for them and there were 14 accounted for.  He said there should have been 15 calves.  He and the receiver went back and counted again, sure enough there were only 14.   Steve thought he either left one in the pens or unfortunately, one may have wandered to the back of the pens and died.  It worried him and hope that the latter wasn’t the case.  He went straight back to the pens to check….no calf to be found.  Maybe he miscounted……

Steve went back to the very back pasture and guess who was standing there???
LOBO!   He had managed to push through a chained gate, squeeze through two
barbed wire fences to get back to his herd!    Steve couldn’t help but to laugh and admire his will and perseverance.   The poor little thing almost died at birth,  got sick at 1 month old and nearly died. When we put him out to be weaned, he found a mama to take care of him.  Then when it was time to sell him,  he did not want any part of that and escaped in the night…  Lobo will be around for a while…. 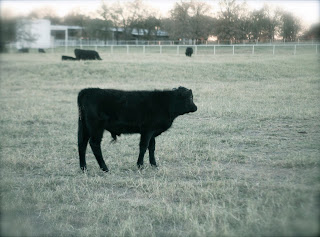 So the moral of this story is…you make your own destiny, no matter what others have planned for you…